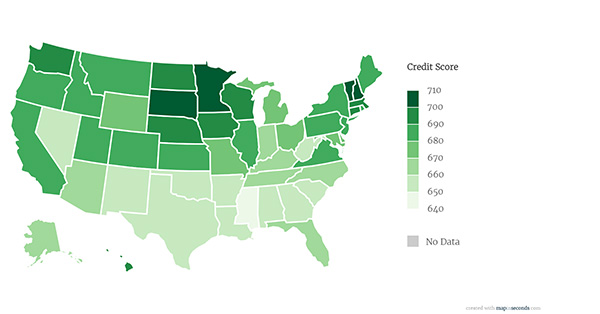 Originally posted on CNBC on June 22, 2018 by
Megan Leonhardt | @Megan_Leonhardt

If they weren’t so nice, Minnesota residents could boast about having America’s highest average credit scores.

The state’s residents have an average credit score of 709, which falls into the “good” range of scores between 670 to 739, according to Experian. Vermont, New Hampshire, South Dakota and Massachusetts round out the top five states with the highest credit scores.

The pattern of states in the upper Midwest doing well by this measure and the South doing less well has remained “pretty consistent” over the past two decades, credit expert John Ulzheimer tells CNBC Make It.

“Credit scoring systems don’t consider geography when calculating a consumer’s credit score so the difference is going to be solely based on the composition of their credit reports,” he says. And Mississippi, with its score of 647, wins the award for the lowest average credit score seemingly every year for two main reasons, he says: a higher delinquency rate and a higher average credit card utilization ratio.

Overall, over half of states have a “good” average credit score, according to Experian. The remaining 19 states, including Mississippi, fall into what Experian considers the “fair” range of between 580 and 669.

Nationwide, “average scores are very strong,” Ulzheimer says, noting that 22.3 percent of Americans have a credit score at or above a “very good” 781.